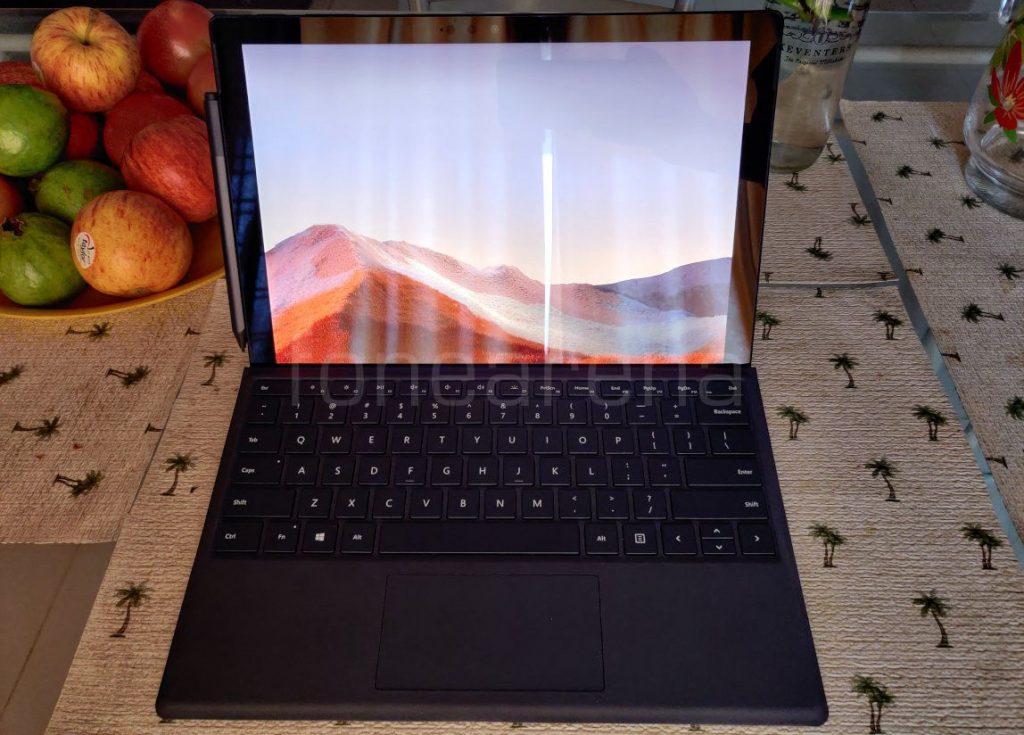 Microsoft’s Surface Pro devices have been leading the 2-in-1 detachable tablet industry for more than 7 years now. The Microsoft Surface Pro 7 is the latest in the line, now updated with Intel’s latest 10th Gen Ice Lake processors that is built on the 10nm process node, finally includes a USB Type-C port and support for Wi-Fi 6. Today, we’ll be reviewing the model with the Core i7 processor with Iris Pro integrated graphics, 16GB RAM and a 512GB SSD. 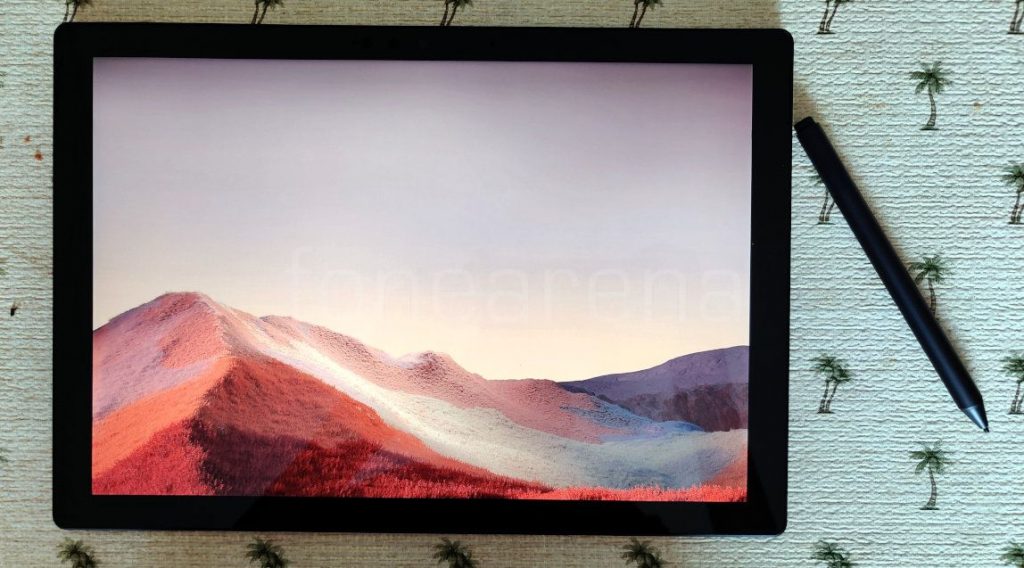 The design of the Microsoft Surface Pro 7 is easily its most recognizable aspect, as it has barely changed over the years. In the front we have a gorgeous 12.3-inch PixelSense display with a resolution of 2736 x 1824 (267 PPI) and an aspect ratio of 3:2, which is great for productivity tasks like word processing and image editing. The colours are vivid and the screen is bright, which meant viewing content in sunlight was not an issue. 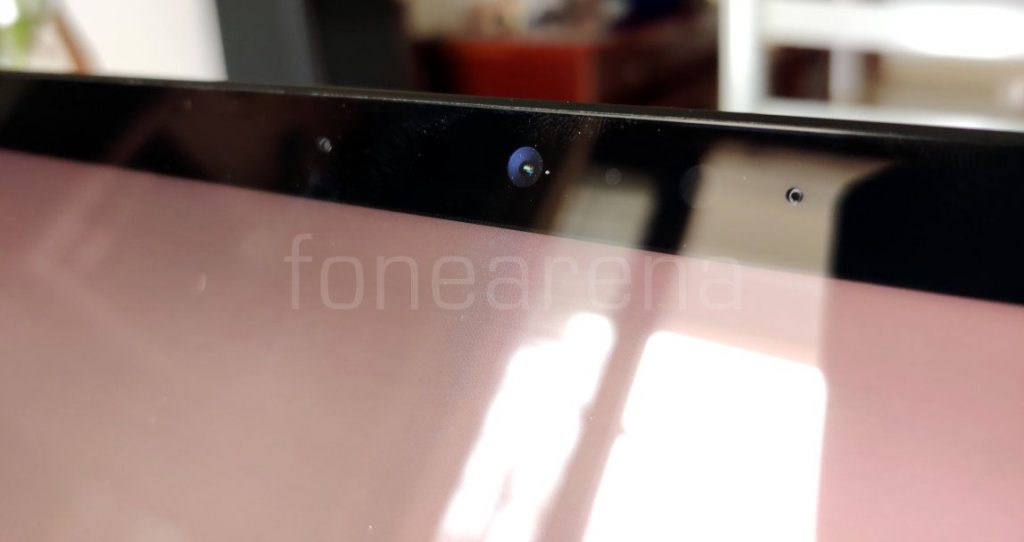 Being a tablet means that the display also supports touch input and it also means that its bezels cannot be thin like modern laptops. This is a compromise that comes with all 2-in-1 tablet PCs. In the top bezel is a 5.0MP front facing camera that outputs decent 1080p video, which in combination with the dual far-field Studio mics makes the Surface Pro 7 great for video conferencing. The voice recording is impressively clear and I found no issues when video calling.

Flanking on each side of the front are the infrared sensors that enable Windows Hello Face authentication. The authentication is fast and I love being signed-in as soon as you open the Type Cover.

The main ports on the Surface can be found on its right edge. There is a full size USB Type-A, a port for the Surface charger and finally, they ditched the mini-display port for a USB Type-C port. I am really surprised that it took this long for Microsoft to add a Type-C, but hey, it’s here. The type-C port supports charging and is specced for the USB 3.1 standard, not Thunderbolt. The other ports on the Surface include a 3.5mm jack on the left edge, a Micro SDXC port below the kickstand and Surface Type Cover port on the bottom edge. On the top edge lies the power button along with a volume rocker. 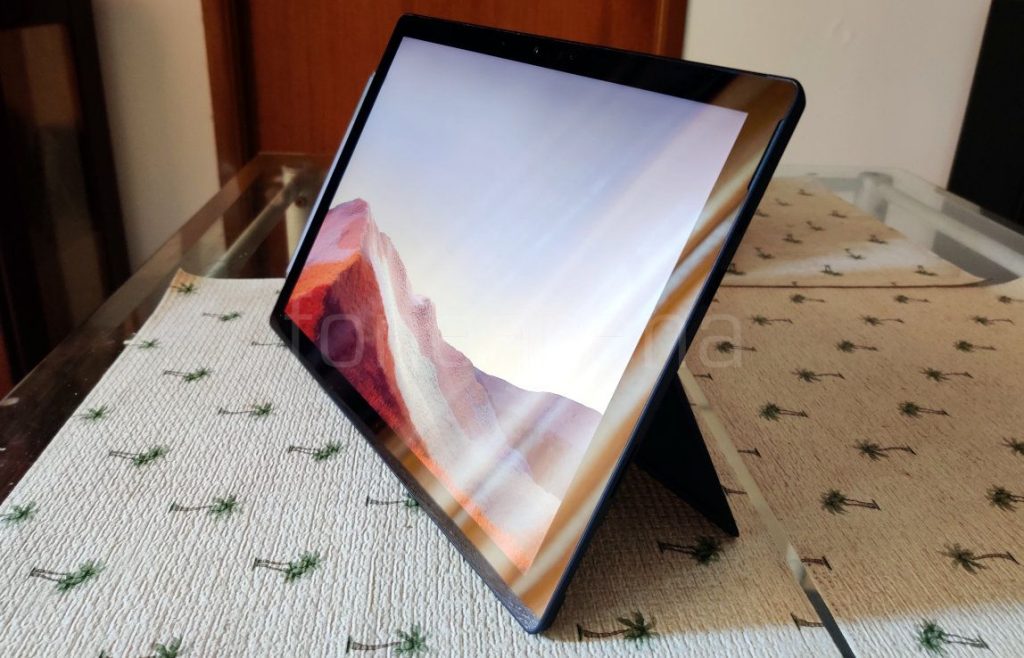 Since the beginning, the Surface has always had a great kickstand and it is no different here. It supports basically infinite angles and the tension in the hinge is perfect. 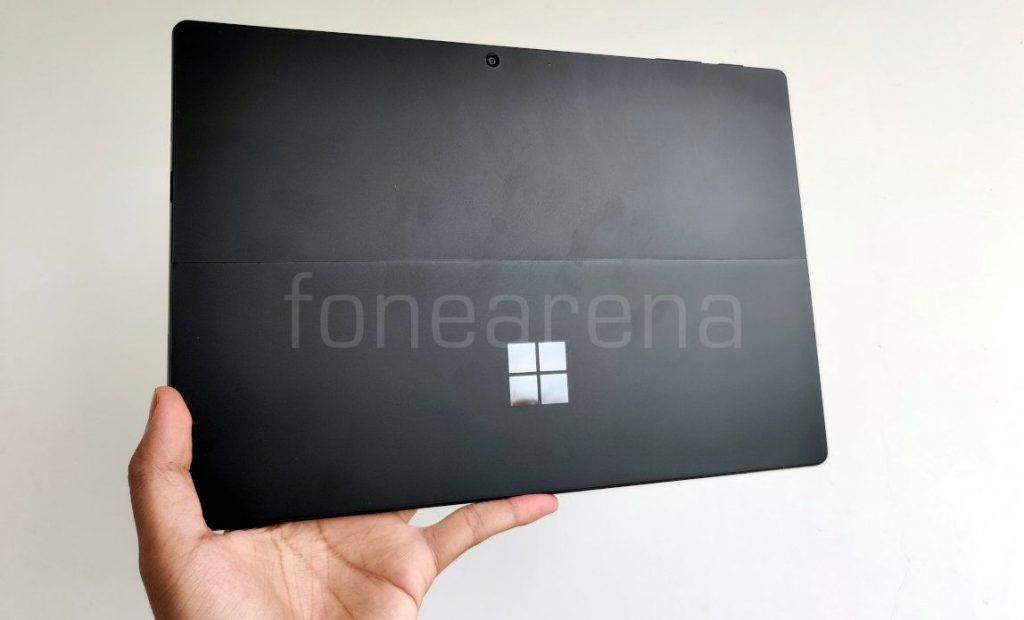 Above the kickstand, there is a rear facing 8MP camera that also outputs 1080p video. A rear camera on a tablet rarely finds use, but the one on Surface is great for clicking photos of documents, etc. 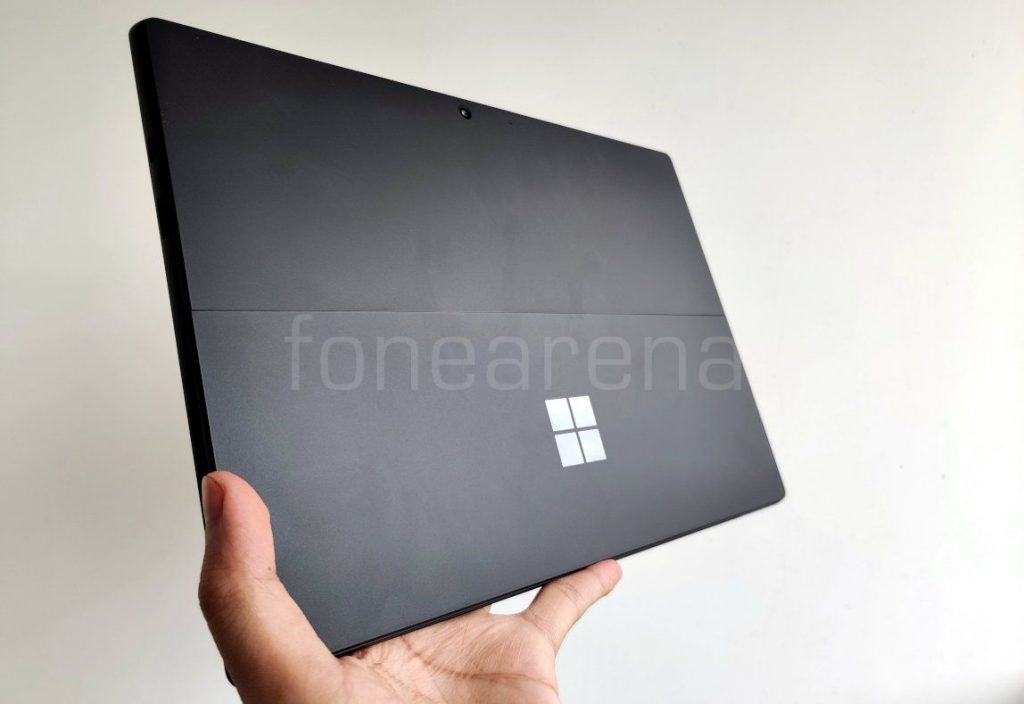 The model I reviewed was configured with the 10th Gen Intel Core i7-1065G7 processor, which is a quad-core chip with a base frequency of 1.3Ghz and a boost frequency of 3.9Ghz, Intel Iris Pro Graphics, 16GB of LPDDR4x RAM and 512GB of SSD storage.

During my review process, I used the Surface Pro 7 as my work laptop and overall, I am quite happy with the performance. I primarily used Google Chrome, Telegram, GIMP for photo editing and a bit of Adobe Lightroom to process some RAW photos on the weekends. System responsive also was quite snappy and the 16GB of RAM in combination with the SSD ensured that apps opened very fast, making multitasking a breeze. The device is great for media streaming, thanks to the dual front facing speakers and beautiful screen. The speakers got loud with an acceptable amount of bass output, and was quite distortion free at higher volumes.

I did notice the occasional snag and hitch when using multiple heavy applications at once and I expected this. The Surface Pro 7 was never meant to be a powerhouse of a device, which should be obvious considering its form factor. The Core i7 is a powerful chip, but with the limited thermal headroom in the slim chassis of the Surface Pro 7, it is impossible to realise the full capabilities of that processor.

Microsoft themselves market this device as a “Versatile 2-in-1 laptop” that is great for “shopping, banking, on-screen writing, and streaming Netflix”. It is not meant to handle huge render files or video editing and that is quite evident from the performance.

The thermals in the Surface Pro 7 were quite under control for the most part, at least in the  Core i7 models thanks to its active fan cooling. The lower end Core i5 and Core i3 models are passively cooled, but since they are lower wattage chips it should not be a problem. Heat is expelled away from the device through the many vents present throughout its sides, which also means no heat under the palms at all.

On the Core i5 and Core i7 models, Microsoft offers an upgraded integrated GPU to the user, specifically the Intel Iris Plus Graphics. These newer integrated GPUs are significantly improved over Intel’s previous generation GPU’s, improving performance in games, in GPU-accelerated tasks like digital art and in media centric applications like streaming Netflix and Amazon Prime.

With it comes to gaming, I was able to play quite a few e-sports titles like CS:GO and Rainbow 6:Siege at acceptable frame rates. Specifically in Rainbow 6:Siege, I was able to achieve 40-45fps at 720p low settings, which is quite playable considering that you are using an integrated GPU.

Connectivity options have been upgraded to the latest Wi-Fi 6 (802.11ax)  standard, along with Bluetooth 5.0. The Surface never dropped a Wi-Fi connection during testing and Bluetooth worked with no issues. Other sensors include Ambient light sensor, Accelerometer, Gyroscope, Magnetometer. 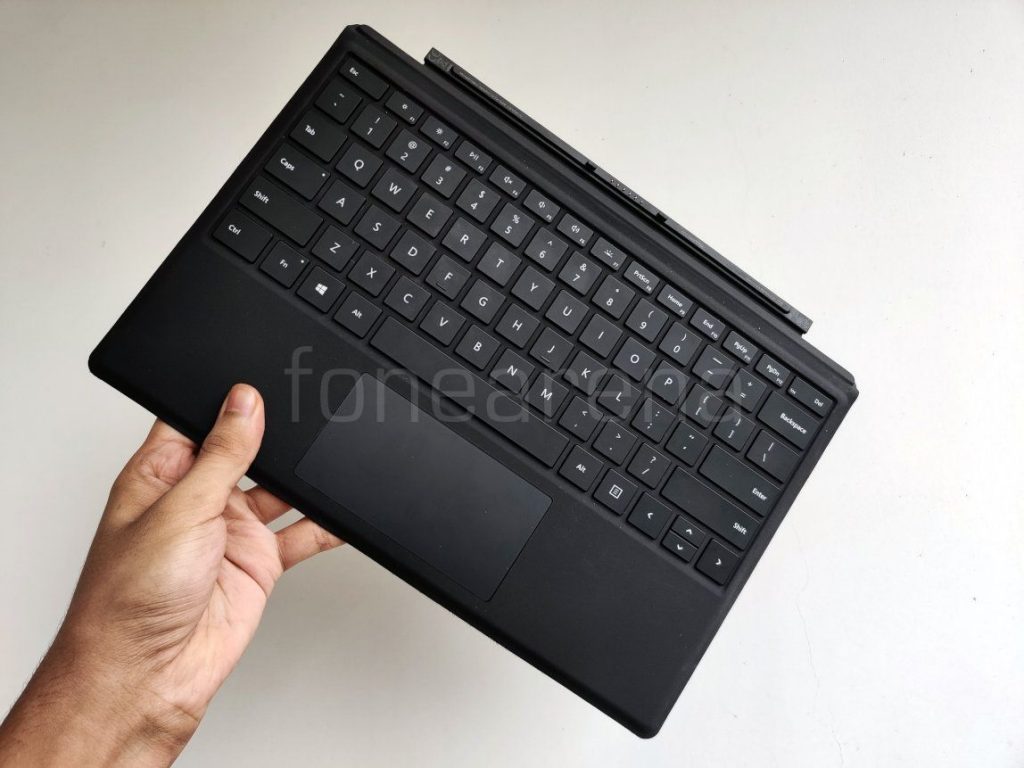 The Surface Pro experience would not be complete without accessories – the Surface Pen and the Surface Pro Type Cover. If you want to get real work done on the Surface, you need a physical keyboard and Microsoft’s Type Cover is a great first party accessory. The keyboard is really well-built and typing experience is near perfect. The backlit keys are well spaced and quiet, keystrokes activate with a right amount of pressure, and they have a nice snappiness when released. 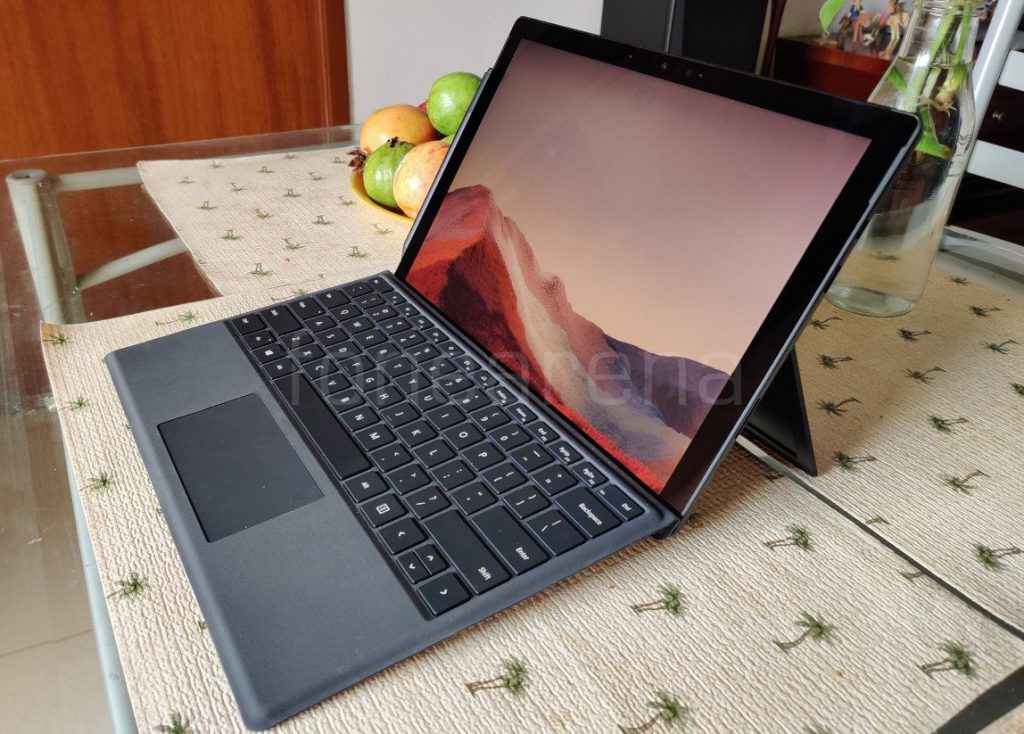 In the Signature Type Cover model, the palm rests are made out of the fancy Alcantara material and from my experience, it feels really good. When Microsoft first released a Type Cover with Alcantara, there were concerns over longevity for the material, and till date, there has not been any major complaints with the material. Finally, the trackpad in the Type Cover is also well engineered. It has a glass surface and uses Windows Precision drivers for a smooth, precise tracking experience. 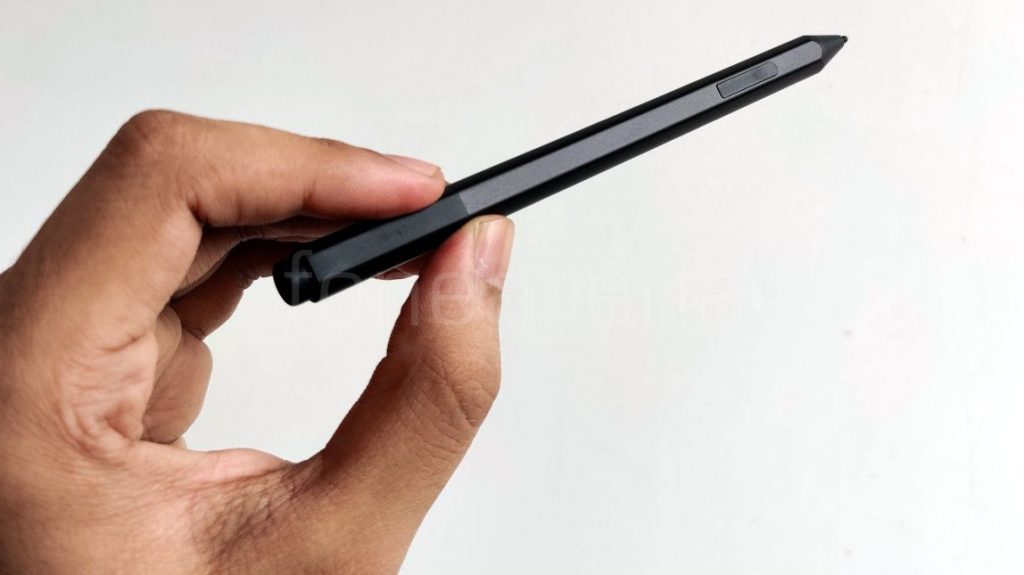 My feelings about the Surface Pen are little mixed. The material quality of the pen is good and the ability to map the back button to custom functions is super useful. However, I was not satisfied with the latency when using the pen. When using the surface pen on drawing applications, you could clearly notice the lag between the pen’s tip and when a line is drawn on the screen. 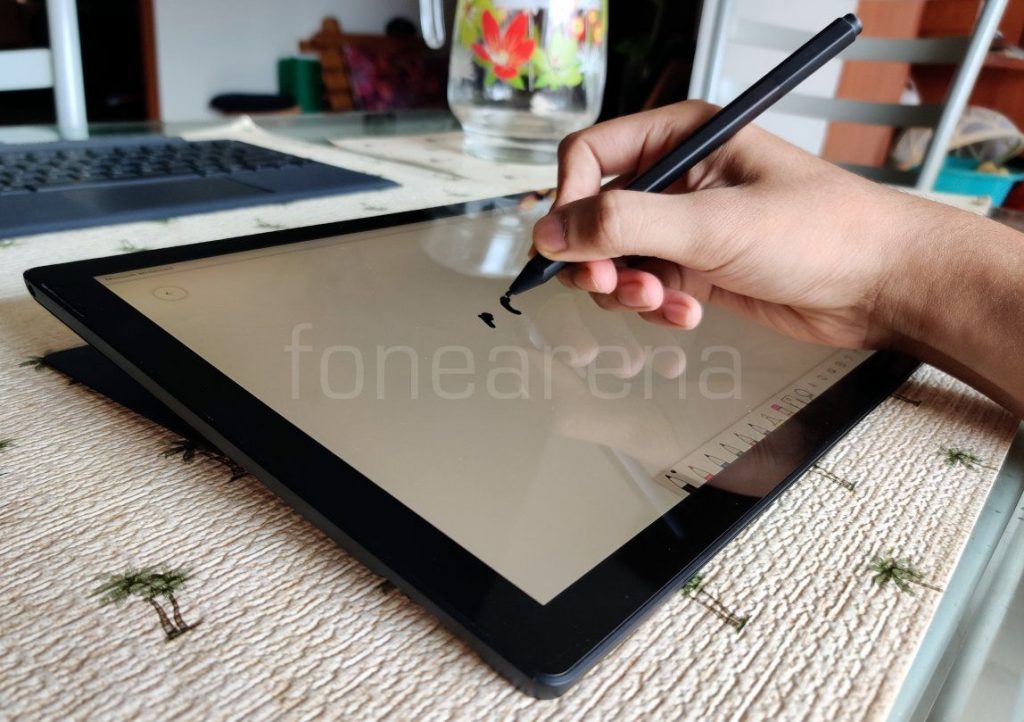 I compared the Surface Pen to using the Apple Pencil on an iPad Pro and the difference was night and day. Even though Microsoft has produced Surface Pens for many generations, they clearly have a lot of catching up to do.

Typically, when you upgrade to a processor with a newer process node, you expect better efficiency and battery life improvements. Unfortunately that is not the case with the Surface Pro 7 and Intel’s 10th Gen Core CPUs. The integrated Iris Pro graphics are more powerful this time around and that means the power consumption has also increased.

During my review, I was able to get around 5 to maybe 5.5 hours of battery life, which appears to be quite a bit lower than the previous generation – Surface Pro 6. So if you highly value battery life in your 2-in-1 PC, then maybe skip the Surface Pro 7. Battery life may get better as Microsoft pushes firmware patches with optimisations, but at the moment battery life for the Surface Pro 7 is disappointing.

If you are purchasing a 2-in-1 tablet PC for the first time however, the Surface Pro 7 does look like a great choice. It is very portable, the screen is beautiful for media consumption and you can get real work done on the go with the Type Cover along with the fact that it runs Windows 10. The only real issue is with the battery life, which is shorter than expected. I would recommend going for the Core i5 model instead spending the extra on the Core i7, as you’ll be getting better performance for your money and the battery life will be better.