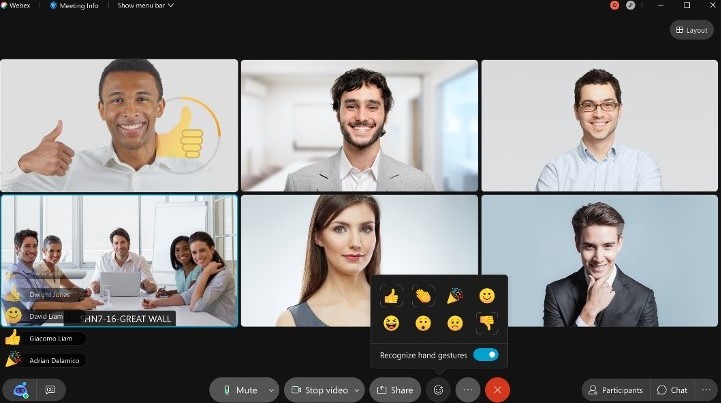 Cisco is bringing hand gestures to its Webex video conferencing software to make it easier for participants to express themselves even while on mute.

Gestures and non-verbal cues have long been an important part of face-to-face meetings as they allow a speaker to emphasize or support their ideas and give the audience a chance to provide real-time feedback. However, the transition to working from home has made it difficult for users to communicate in this way while on a video call.

For this reason, Cisco is now using AI to take users’ natural, non-verbal gestures and translate them into animated images that everyone in a meeting can see on-screen. As a result, meeting participants can provide feedback to their coworkers without having to unmute themselves or use their keyboard or mouse.

VP and GM of Webex Meetings at Cisco, Abhay Kulkarni provided further insight in a blog post on why the company decided to add gestures to its video conferencing software, saying:

“Gestures can bridge language, geographical boarders, and even personality types ―often saying more than a thousand words. But now that most meetings are remote and half the people in a meeting are on mute, reading non-verbal cues has become more challenging. At Cisco we’re determined to power an inclusive future, with collaboration technology that levels the playing field and makes experiences 10x better ―regardless of the language you speak, or where or how you work.”

Gestures are now available in the latest version of Cisco Webex and to begin using them, users will need to navigate to the bottom of the screen, click on the reaction button and toggle “Recognize hand gestures” on.

Once enabled, Cisco’s AI will automatically detect hand gestures such as thumbs up, thumbs down and clapping and display them as a reaction in a user’s video window. Meeting participants will also be able to react using smiling, laughing, shocked and party emojis while in a video call.

Cisco is well aware that gestures can be interpreted differently in other parts of the world which is why the new feature will be localized to respect cultural differences.

Webex’s new gesture feature will be generally available this month and depending on its reception, we could also see Microsoft Teams, Zoom and other video conferencing software implement similar ways to communicate in a video call using non-verbal cues and gestures.